Miriam joined Moeller IP Advisors in 2008, where she has since worked as a patent technical advisor in a wide variety of chemical subject matter, including synthetic organic and inorganic chemistry, industrial processes, polymer chemistry, metal recovery and refining, chemical engineering and devices, among other fields.

From 1992 to 1999, Miriam was an Argentine Patent Examiner in the polymer and chemistry areas. In the year 2000, she was promoted to Coordinator of the chemical and industrial process areas of the Argentine Patent Office. In 2002, she was appointed General Coordinator of the Patent Office. She held this position until 2004. Thanks to her extensive directorial roles, she has developed excellent managerial experience.

Some important developments occurred during Miriam’s tenure as General Coordinator of the Patent Office. She participated in drafting the Patent Office’s Guidelines on Patentability (R243/03) and from 2000 to 2004, she presided over the training of examiners in the area of chemistry.

Miriam was guest Lecturer of Industrial Property Master at Austral University from 2006 to 2012. From 2006 to 2016, she was an evaluator of the National award for Innovation (INNOVAR).

Outside the office, Miriam is a veteran hockey player and she and her team have won several tournaments. She also enjoys cycling and likes to travel. 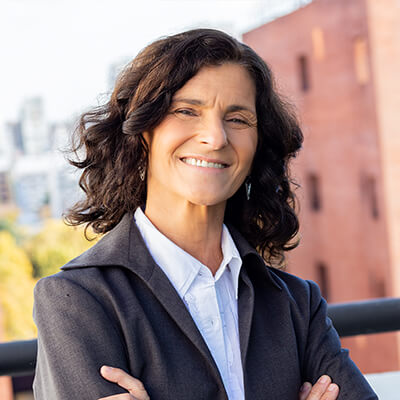