By José Santacroce. Partner and Head of Patent Department

The European Patent Office (EPO) just published its Patent Index 2019, below a summary of the key statistics.

In total, nearly half of all patent applications came from companies based in Europe, with Germany alone accounting for some 15%. From the other regions, US firms dominated with a quarter of all applications, followed by companies from Japan, China and South Korea.

Origin of patent applications in 2019 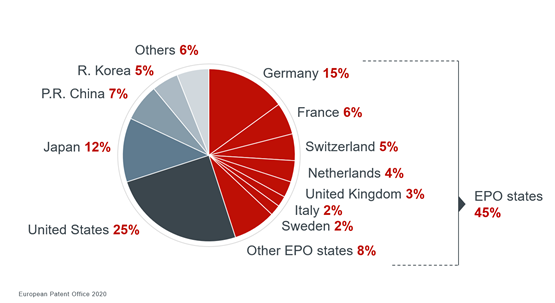 In terms of growth, patent applications filed by European companies increased modestly. There was a strong rise in demand from the US. The steepest growth rates were posted by Asian companies, in particular Chinese and South Korean firms.

Top 10 countries for patent applications at the EPO in 2019 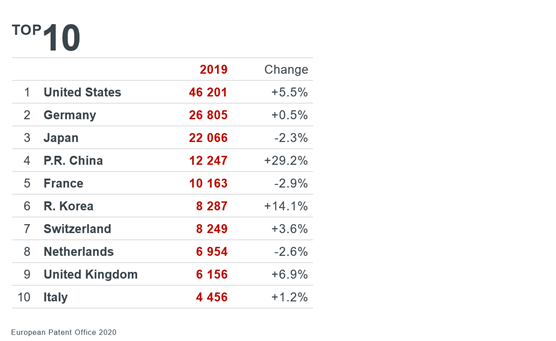 Among European countries with large volumes, the greatest increases in filings came from Sweden, the UK, and Switzerland. Filings from Germany remained stable and Italy saw moderate growth, while France and the Netherlands saw decreases.

Looking at countries with mid-range patenting volumes, Spain saw the biggest rise in applications. There were also increases in filings from Belgium and Austria.

Further significant growth was seen from companies in Portugal, Ireland, and Norway, albeit from small overall patenting volumes.

The patent applications filed with the EPO in 2019 also indicate Europe’s position as a key market for the next wave of digital transformation technologies.

Technical fields with most patent applications in 2019 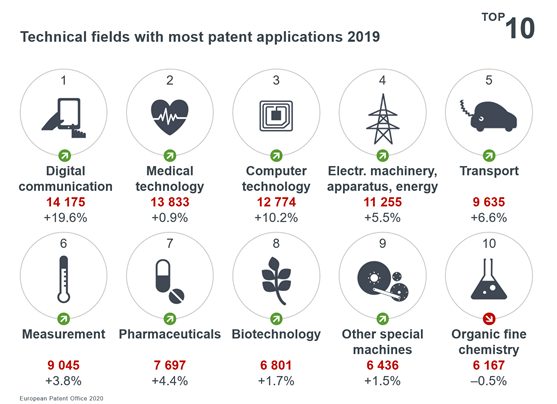 Digital communication: The new top technology field at the EPO

Digital communication was the new top technology field at the EPO, reflecting the rapid development of 5G technologies.

China, the US, and Europe were the most active regions of origin. They each account for roughly a quarter of the patent applications in this field.

It was fuelled by the growing importance of Artificial Intelligence. Patent applications concerned especially machine learning, data retrieval, image data processing, and pattern recognition. Overall, US companies led this field, with European applicants not far behind.

The dominant position of digital technologies was clearly reflected in the list of leading applicants. Huawei topped the table, followed by Samsung, LG, United Technologies and Siemens.

Overall, European companies retained the largest share in seven of the ten most active technology fields. These include transport, where Europe continued to excel in the automotive sector. The same was also true for clean energy technologies.