Alfredo joined the Moeller IP team in February 2017, as an administrative assistant, performing functions of classification, preparation, scanning, editing and filing of trademarks, patents, credentials, priority certificates and other documents pertaining to the digitization requirements, in addition to performing tasks inherent to the position held, providing assistance to all departments of the company. Since the month of July 2018, Alfredo began with new procedures, conducting the review and control of publications in the official gazettes of the Institute of Intellectual Property of Argentina to generate notification reports.

As of 2019, Alfredo has had the responsibility of loading into the internal management system the foreign documentation sent by the Paralegals corresponding to brands, such as late filing of powers of attorney, priority certificates, oppositions, payment of official and final fees, in addition to issuing the respective notifications to the clients about said documents.

In addition, since May 2019, Alfredo has assisted in the IT department, where he makes inquiries to generate reports from the database.

He is an Advanced University Technician in Business Organization, graduated from the University College “Fermín Toro” of Barquisimeto-Lara in Venezuela in 2001.

In 2018, Alfredo began his preparation in the area of ​​web development, managing to approve certifications as fronted designer and in prototype development of interfaces with Adobe XD and PHP language for the backend in Udemy. Additionally, in the coursera.org platform, he has been accredited in the Amazon Web Services (AWS) fundamentals domain, as well as in Google Analytics for beginners by Google Analytics Academy.

In his free time, he devotes himself to meditation and physical activity and sports such as basketball, volleyball, chess, softball and running. 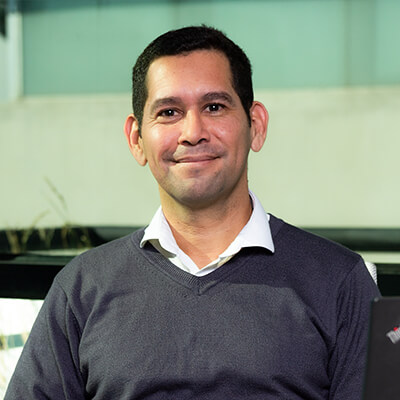